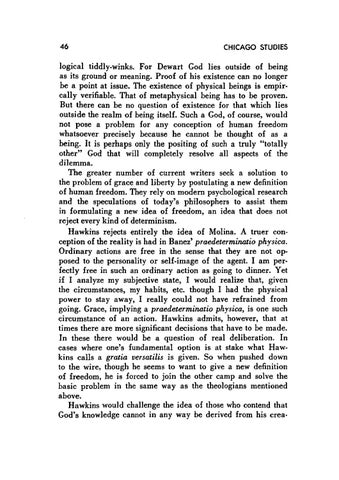 logical tiddly-winks. For Dewart God lies outside of being as its ground or meaning. Proof of his existence can no longer be a point at issue. The existence of physical beings is empircally verifiable. That of metaphysical being has to be proven. But there can be no question of existence for that which lies outside the realm of being itself. Such a God, of course, would not pose a problem for any conception of human freedom whatsoever precisely because he cannot be thought of as a being. It is perhaps only the positing of such a truly "totally other" God that will completely resolve all aspects of the dilemma. The greater number of current writers seek a solution to the problem of grace and liberty by postulating a new definition of human freedom. They rely on modern psychological research and the speculations of today's philosophers to assist them in formulating a new idea of freedom, an idea that does not reject every kind of determinism. Hawkins rejects entirely the idea of Molina. A truer conception of the reality is had in Banez' praedeterminatio physica. Ordinary actions are free in the sense that they are not opposed to the personality or self-image of the agent. I am perÂˇ fectly free in such an ordinary action as going to dinner. Yet if I analyze my subjective state, I would realize that, given the circumstances, my habits, etc. though I had the physical power to stay away, I really could not have refrained from going. Grace, implying a praedeterminatio physica, is one such circumstance of an action. Hawkins admits, however, that at times there are more significant decisions that have to be made. In these there would be a question of real deliberation. In cases where one's fundamental option is at stake what Hawkins calls a gratia versatilis is given. So when pushed down to the wire, though he seems to want to give a new definition of freedom, he is forced to join the other camp and solve the basic problem in the same way as the theologians mentioned above. Hawkins would challenge the idea of those who contend that God's knowledge cannot in any way be derived from his creaÂˇ