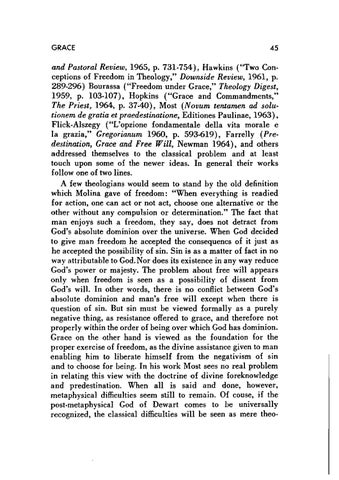 and Pastoral Review, 1965, p. 731-754), Hawkins ("Two Con路 ceptions of Freedom in Theology," Downside Review, 1961, p. 289-296) Bourassa ("Freedom under Grace," Theology Digest, 1959, p. 103-107), Hopkins ("Grace and Commandments," The Priest, 1964, p. 37-40), Most ( N ovum tentamen ad solu路 tionem de gratia et praedestinatione, Editiones Paulinae, 1963), Flick-Aiszegy ("L'opzione fondamentale della vita morale e Ia grazia," Gregorianum 1960, p. 593-619), Farrelly (Pre路 destination, Grace and Free Will, Newman 1964), and others addressed themselves to the classical problem and at least touch upon some of the newer ideas. In general their works follow one of two lines. A few theologians would seem to stand by the old definition which Molina gave of freedom: "When everything is readied for action, one can act or not act, choose one alternative or the other without any compulsion or determination." The fact that man enjoys such a freedom, they say, does not detract from God's absolute dominion over the universe. When God decided to give man freedom he accepted the consequencs of it just as he accepted the possibility of sin. Sin is as a matter of fact in no way attributable to God. Nor does its existence in any way reduce God's power or majesty. The problem about free will appears only when freedom is seen as a possibility of dissent from God's will. In other words, there is no conflict between God's absolute dominion and man's free will except when there is question of sin. But sin must be viewed formally as a purely negative thing, as resistance offered to grace, and therefore not properly within the order of being over which God has dominion. Grace on the other hand is viewed as the foundation for the proper exercise of freedom, as the divine assistance given to man enabling him to liberate himself from the negativism of sin and to choose for being. In his work Most sees no real problem in relating this view with the doctrine of divine foreknowledge and predestination. When all is said and done, however, metaphysical difficulties seem still to remain. Of couse, if the post-metaphysical God of Dewart comes to be universally recognized, the classical difficulties will be seen as mere theo路