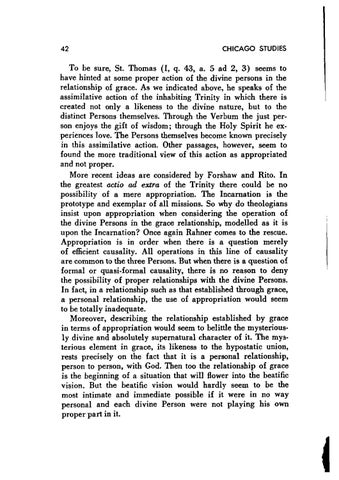 To be sure, St. Thomas (1, q. 43, a. 5 ad 2, 3) seems to have hinted at some proper action of the divine persons in the relationship of grace. As we indicated above, he speaks of the assimilative action of the inhabiting Trinity in which there is created not only a likeness to the divine nature, but to the distinct Persons themselves. Through the Verbum the just perÂˇ son enjoys the gift of wisdom; through the Holy Spirit he exÂˇ periences love. The Persons themselves become known precisely in this assimilative action. Other passages, however, seem to found the more traditional view of this action as appropriated and not proper. More recent ideas are considered by Forshaw and Rito. In the greatest actio ad extra of the Trinity there could be no possibility of a mere appropriation. The Incarnation is the prototype and exemplar of all missions. So why do theologians insist upon appropriation when considering the operation of the divine Persons in the grace relationship, modelled as it is upon the Incarnation? Once again Rahner comes to the rescue. Appropriation is in order when there is a question merely of efficient causality. All operations in this line of causality are common to the three Persons. But when there is a question of formal or quasi-formal causality, there is no reason to deny the possibility of proper relationships with the divine Persons. In fact, in a relationship such as that established through grace, a personal relationship, the use of appropriation would seem to be totally inadequate. Moreover, describing the relationship established by grace in terms of appropriation would seem to belittle the mysteriousÂˇ ly divine and absolutely supernatural character of it. The mysterious element in grace, its likeness to the hypostatic union, rests precisely on the fact that it is a personal relationship, person to person, with God. Then too the relationship of grace is the beginning of a situation that will flower into the beatific vision. But the beatific vision would hardly seem to be the most intimate and immediate possible if it were in no way personal and each divine Person were not playing his own proper part in it.