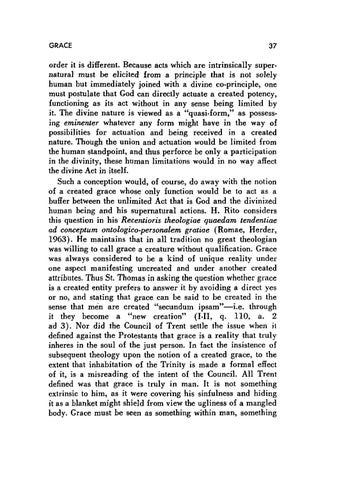 order it is different. Because acts which are intrinsically superÂˇ natural must be elicited from a principle that is not solely human hut immediately joined with a divine co-principle, one must postulate that God can directly actuate a created potency, functioning as its act without in any sense being limited by it. The divine nature is viewed as a "quasi-form," as possessÂˇ ing eminenter whatever any form might have in the way of possibilities for actuation and being received in a created nature. Though the union and actuation would be limited from the human standpoint, and thus perforce be only a participation in the divinity, these human limitations would in no way affect the divine Act in itself. Such a conception would, of course, do away with the notion of a created grace whose only function would be to act as a buffer between the unlimited Act that is God and the divinized human being and his supernatural actions. H. Rito considers this question in his Recentioris theologiae quaedam tendentiae ad conceptum ontologico-personalem gratiae ( Romae, Herder, 1963). He maintains that in all tradition no great theologian was willing to call grace a creature without qualification. Grace was always considered to be a kind of unique reality under one aspect manifesting uncreated and under another created attributes. Thus St. Thomas in asking the question whether grace is a created entity prefers to answer it by avoiding a direct yes or no, and stating that grace can be said to be created in the sense that men are created "secundum ipsam"-i.e. through it they become a "new creation" (I-II, q. llO, a. 2 ad 3). Nor did the Council of Trent settle the issue when it defined against the Protestants that grace is a reality that truly inheres in the soul of the just person. In fact the insistence of subsequent theology upon the notion of a created grace, to the extent that inhabitation of the Trinity is made a formal effect of it, is a misreading of the intent of the Council. All Trent defined was that grace is truly in man. It is not something extrinsic to him, as it were covering his sinfulness and hiding it as a blanket might shield from view the ugliness of a mangled body. Grace must be seen as something within man, something