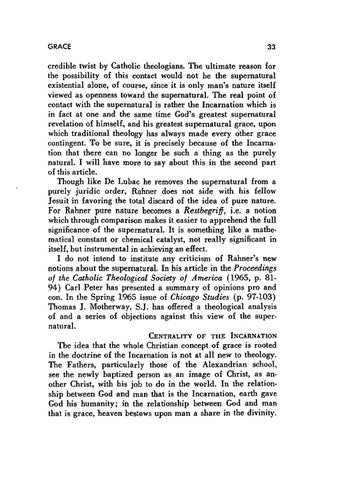 credible twist by Catholic theologians. The ultimate reason for the possibility of this contact would not be the supernatural existential alone, of course, since it is only man's nature itself viewed as openness toward the supernatural. The real point of contact with the supernatural is rather the Incarnation which is in fact at one and the same time God's greatest supernatural revelation of himself, and his greatest supernatural grace, upon which traditional theology has always made every other grace contingent. To be sure, it is precisely because of the Incarna· tion that there can no longer be such a thing as the purely natural. I will have more to say about this in the second part of this article. Though like De Lubac he removes the supernatural from a purely juridic order, Rahner does not side with his fellow Jesuit in favoring the total discard of the idea of pure nature. For Rahner pure nature becomes a Restbegriff, i.e. a notion which through comparison makes it easier to apprehend the full significance of the supernatural. It is something like a mathe· matical constant or chemical catalyst, not really significant in itself, but instrumental in achieving an effect. I do not intend to institute any criticism of Rahner's new notions about the supernatural. In his article in the Proceedings of the Catholic Theological Society of America (1965, p. 8194) Carl Peter has presented a summary of opinions pro and con. In the Spring 1965 issue of Chicago Studies (p. 97-103) Thomas J. Motherway, S.J. has offered a theological analysis of and a series of objections against this view of the super· natural. CENTRALITY OF THE INCARNATION

The idea that the whole Christian concept of grace is rooted in the doctrine of the Incarnation is not at all new to theology. The Fathers, particularly those of the Alexandrian school, see the newly baptized person as an image of Christ, as an· other Christ, with his job to do in the world. In the relation· ship between God and man that is the Incarnation, earth gave God his humanity; in the relationship between God and man that is grace, heaven bestows upon man a share in the divinity.