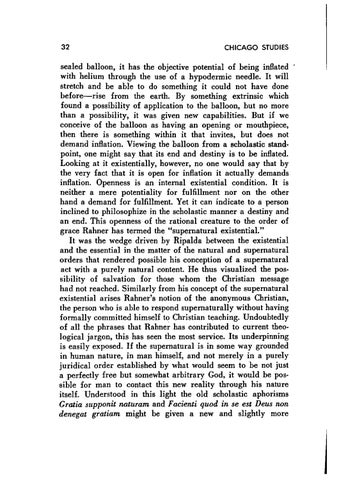 sealed balloon, it has the objective potential of being inflated with helium through the use of a hypodermic needle. It will stretch and be able to do something it could not have done before--rise from the earth. By something extrinsic which found a possibility of application to the balloon, but no more than a possibility, it was given new capabilities. But if we conceive of the balloon as having an opening or mouthpiece, then there is something within it that invites, but does not demand inflation. Viewing the balloon from a scholastic standÂˇ point, one might say that its end and destiny is to be inflated. Looking at it existentially, however, no one would say that by the very fact that it is open for inflation it actually demands inflation. Openness is an internal existential condition. It is neither a mere potentiality for fulfillment nor on the other hand a demand for fulfillment. Yet it can indicate to a person inclined to philosophize in the scholastic manner a destiny and an end. This openness of the rational creature to the order of grace Rahner has termed the "supernatural existential." It was the wedge driven by Ripalda between the existential and the essential in the matter of the natural and supernatural orders that rendered possible his conception of a supernatural act with a purely natural content. He thus visualized the posÂˇ sibility of salvation for those whom the Christian message had not reached. Similarly from his concept of the supernatural existential arises Rahner's notion of the anonymous Christian, the person who is able to respond supernaturally without having formally committed himself to Christian teaching. Undoubtedly of all the phrases that Rahner has contributed to current theoÂˇ logical jargon, this has seen the most service. Its underpinning is easily exposed. If the supernatural is in some way grounded in human nature, in man himself, and not merely in a purely juridical order established by what would seem to be not just a perfectly free but somewhat arbitrary God, it would be possible for man to contact this new reality through his nature itself. Understood in this light the old scholastic aphorisms Gratia supponit naturam and Facienti quod in se est Deus non denegat gratiam might be given a new and slightly more