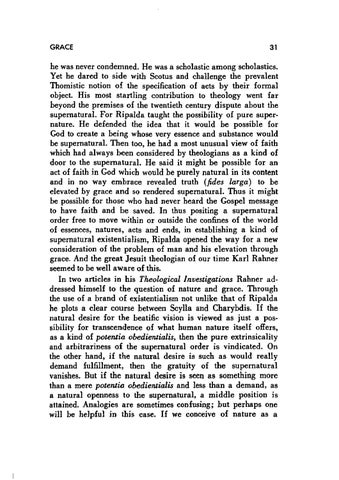 he was never condemned. He was a scholastic among scholastics. Yet he dared to side with Scotus and challenge the prevalent Thomistic notion of the specification of acts by their formal object. His most startling contribution to theology went far beyond the premises of the twentieth century dispute about the supernatural. For Ripalda taught the possibility of pure superÂˇ nature. He defended the idea that it would be possible for God to create a being whose very essence and substance would be supernatural. Then too, he had a most unusual view of faith which had always been considered by theologians as a kind of door to the supernatural. He said it might be possible for an act of faith in God which would be purely natural in its content and in no way embrace revealed truth (fides larga) to be elevated by grace and so rendered supernatural. Thus it might be possible for those who had never heard the Gospel message to have faith and be saved. In thus positing a supernatural order free to move within or outside the confines of the world of essences, natures, acts and ends, in establishing a kind of supernatural existentialism, Ripalda opened the way for a new consideration of the problem of man and his elevation through grace. And the great Jesuit theologian of our time Karl Rahner seemed to be well aware of this. In two articles in his Theological Investigations Hahner adÂˇ dressed himself to the question of nature and grace. Through the use of a brand of existentialism not unlike that of Ripalda he plots a clear course between Scylla and Charybdis. If the natural desire for the beatific vision is viewed as just a posÂˇ sibility for transcendence of what human nature itself offers, as a kind of polenlia obedienlialis, then the pure extrinsicality and arbitrariness of the supernatural order is vindicated. On the other hand, if the natural desire is such as would really demand fulfillment, then the gratuity of the supernatural vanishes. But if the natural desire is seen as something more than a mere polenlia obedien1ialis and less than a demand, as a natural openness to the supernatural, a middle position is attained. Analogies are sometimes confusing; but perhaps one will be helpful in this case. If we conceive of nature as a