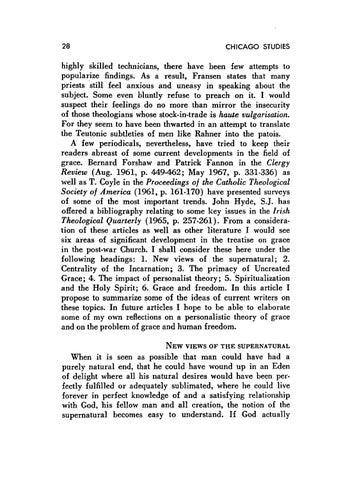 highly skilled technicians, there have been few attempts to popularize findings. As a result, Fransen states that many priests still feel anxious and uneasy in speaking about the subject. Some even bluntly refuse to preach on it. I would suspect their feelings do no more than mirror the insecurity of those theologians whose stock-in-trade is haute vulgarisation. For they seem to have been thwarted in an attempt to translate the Teutonic subtleties of men like Rahner into the patois. A few periodicals, nevertheless, have tried to keep their readers abreast of some current developments in the field of grace. Bernard Forshaw and Patrick Fannon in the Clergy Review (Aug. 1961, p. 449-462; May 1967, p. 331-336) as well as T. Coyle in the Proceedings of the Catholic Theological Society of America (1961, p. 161-170) have presented surveys of some of the most important trends. John Hyde, S.J. has offered a bibliography relating to some key issues in the Irish Theological Quarterly (1965, p. 257-261). From a consideraÂˇ tion of these articles as well as other literature I would see six areas of significant development in the treatise on grace in the post-war Church. I shall consider these here under the following headings: 1. New views of the supernatural; 2. Centrality of the Incarnation; 3. The primacy of Uncreated Grace; 4. The impact of personalist theory; 5. Spiritualization and the Holy Spirit; 6. Grace and freedom. In this article I propose to summarize some of the ideas of current writers on these topics. In future articles I hope to be able to elaborate some of my own reflections on a personalistic theory of grace and on the problem of grace and human freedom. NEW VIEWS OF THE SUPERNATURAL

When it is seen as possible that man could have had a purely natural end, that he could have wound up in an Eden of delight where all his natural desires would have been perÂˇ fectly fulfilled or adequately sublimated, where he could live forever in perfect knowledge of and a satisfying relationship with God, his fellow man and all creation, the notion of the supernatural becomes easy to understand. If God actually