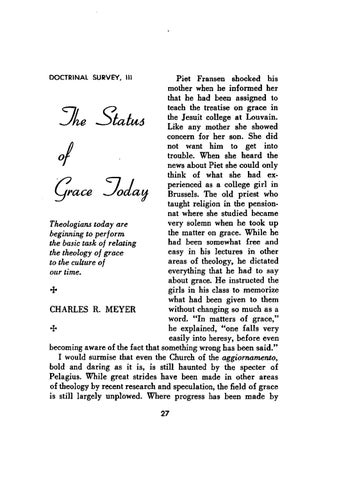 Piet Fransen shocked his mother when he informed her that he had been assigned to teach the treatise on grace in the Jesuit college at Louvain. Like any mother she showed concern for her son. She did not want him to get into trouble. When she heard the news about Piet she could only think of what she had experienced as a college girl in Brussels. The old priest who taught religion in the pensionnat where she studied became very solemn when he took up Theologians today are the matter on grace. While he beginning to perform had been somewhat free and the basic task of relating easy in his lectures in other the theology of grace areas of theology, he dictated to the culture of everything that he had to say our time. about grace. He instructed the girls in his class to memorize what had been given to them without changing so much as a CHARLES R. MEYER word. &quot;In matters of grace,&quot; he explained, &quot;one falls very + easily into heresy, before even becoming aware of the fact that something wrong has been said.&quot; I would surmise that even the Church of the aggiornamento, bold and daring as it is, is still haunted by the specter of Pelagius. While great strides have been made in other areas of theology by recent research and speculation, the field of grace is still largely unplowed. Where progress has been made by