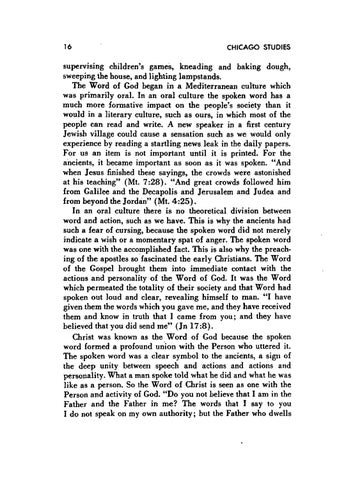 supervtsmg children's games, kneading and baking dough, sweeping the house, and lighting lampstands. The Word of God began in a Mediterranean culture which was primarily oral. In an oral culture the spoken word has a much more formative impact on the people's society than it would in a literary culture, such as ours, in which most of the people can read and write. A new speaker in a first century Jewish village could cause a sensation such as we would only experience by reading a startling news leak in the daily papers. For us an item is not important until it is printed. For the ancients, it became important as soon as it was spoken. "And when Jesus finished these sayings, the crowds were astonished at his teaching" (Mt. 7 :28). "And great crowds followed him from Galilee and the Decapolis and Jerusalem and Judea and from beyond the Jordan" (Mt. 4:25). In an oral culture there is no theoretical division between word and action, such as we have. This is why the ancients had such a fear of cursing, because the spoken word did not merely indicate a wish or a momentary spat of anger. The spoken word was one with the accomplished fact. This is also why the preaching of the apostles so fascinated the early Christians. The Word of the Gospel brought them into immediate contact with the actions and personality of the Word of God. It was the Word which permeated the totality of their society and that Word had spoken out loud and clear, revealing himself to man. "I have given them the words which you gave me, and they have received them and know in truth that I came from you; and they have believed that you did send me" (Jn 17:8). Christ was known as the Word of God because the spoken word formed a profound un-ion with the Person who uttered it. The spoken word was a clear symbol to the ancients, a sign of the deep unity between speech and actions and actions and personality. What a man spoke told what he did and what he was like as a person. So the Word of Christ is seen as one with the Person and activity of God. "Do you not believe that I am in the Father and the Father in me? The words that I say to you I do not speak on my own authority; but the Father who dwells