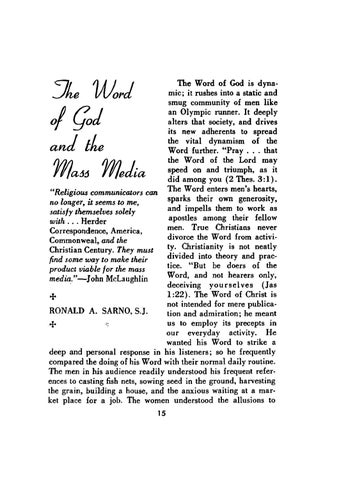 The Word of God is dynamic; it rushes into a static and smug community of men like an Olympic runner. It deeply alters that society, and drives its new adherents to spread the vital dynamism of the Word further. &quot;Pray . . . that the Word of the Lord may speed on and triumph, as it did among you (2 Thes. 3: I). &quot;Religious communicators can The Word enters men&#39;s hearts, sparks their own generosity, no longer, it seems to me, and impells them to work as satisfy themselves solely apostles among their fellow with ... Herder men. True Christians never Correspondence, America, divorce the Word from activiCommonweal, and the ty. Christianity is not neatly Christian Century. They must divided into theory and pracfind some way to make their tice. &quot;But be doers of the product viable for the mass Word, and not hearers only, media.&quot;-John McLaughlin deceiving yourselves (Jas 1:22). The Word of Christ is not intended for mere publicaRONALD A. SARNO, S.J. tion and admiration; he meant :; us to employ its precepts in + our everyday activity. He wanted his Word to strike a deep and personal response in his listeners; so he frequently compared the doing of his Word with their normal daily routine. The men in his audience readily understood his frequent references to casting fish nets, sowing seed in the ground, harvesting the grain, building a house, and the anxious waiting at a market place for a job. The women understood the allusions to