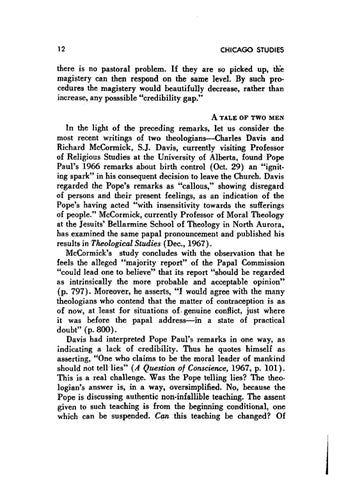 there is no pastoral problem. If they are so picked up, tlie magistery can then respond on the same level. By such proÂˇ cedures the magistery would beautifully decrease, rather than increase, any posssible "credibility gap."

A TALE OF TWO MEN In the light of the preceding remarks, let us consider the most recent writings of two theologians--Charles Davis and Richard McCormick, S.J. Davis, currently visiting Professor of Religious Studies at the University of Alberta, found Pope Paul's 1966 remarks about birth control (Oct. 29) an "ignitÂˇ ing spark" in his consequent decision to leave the Church. Davis regarded the Pope's remarks as "callous," showing disregard of persons and their present feelings, as an indication of the Pope's having acted "with insensitivity towards the sufferings of people." McCormick, currently Professor of Moral Theology at the Jesuits' Bellarmine School of Theology in North Aurora, has examined the same papal pronouncement and published his results in Theological Studies (Dec., 1967). McCormick's study concludes with the observation that he feels the alleged "majority report" of the Papal Commission "could lead one to believe" that its report "should be regarded as intrinsically the more probable and acceptable opinion" (p. 797). Moreover, he asserts, "I would agree with the many theologians who contend that the matter of contraception is as of now, at least for situations of. genuine conflict, just where it was before the papal address-in a state of practical doubt" (p. 800). Davis had interpreted Pope Paul's remarks in one way, as indicating a lack of credibility. Thus he quotes himself as asserting, "One who claims to be the moral leader of mankind should not tell lies" (A Question of Conscience, 1967, p. 101). This is a real challenge. Was the Pope telling lies? The theologian's answer is, in a way, oversimplified. No, because the Pope is discussing authentic non-infallible teaching. The assent given to such teaching is from the beginning conditional, one which can be suspended. Can this teaching be changed? Of