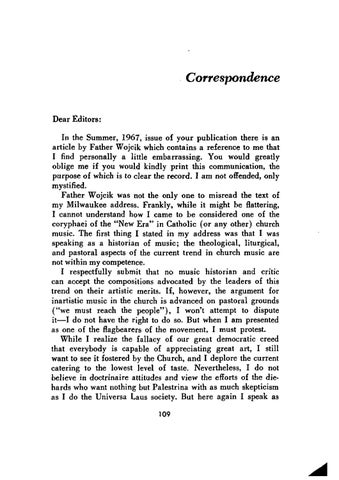 Correspondence Dear Editors: In the Summer, 1967, issue of your publication there is an article by Father Wojcik which contains a reference to me that I find personally a little embarrassing. You would greatly oblige me if you would kindly print this communication, the purpose of which is to clear the record. I am not offended, only mystified. Father Wojcik was not the only one to misread the text of my Milwaukee address. Frankly, while it might be flattering, I cannot understand how I came to be considered one of the coryphaei of the &quot;New Era&quot; in Catholic (or any other) church music. The first thing I stated in my address was that I was speaking as a historian of music; the theological, liturgical, and pastoral aspects of the current trend in church music are not within my competence. I respectfully submit that no music historian and critic can accept the compositions advocated by the leaders of this trend on their artistic merits. If, however, the argument for inartistic music in the church is advanced on pastoral grounds (&quot;we must reach the people&quot;), I won&#39;t attempt to dispute it-I do not have the right to do so. But when I am presented as one of the flagbearers of the movement, I must protest. While I realize the fallacy of our great democratic creed that everybody is capable of appreciating great art, I still want to see it fostered by the Church, and I deplore the current catering to the lowest level of taste. Nevertheless, I do not believe in doctrinaire attitudes and view the efforts of the diehards who want nothing but Palestrina with as much skepticism as I do the Universa Laus society. But here again I speak as 109