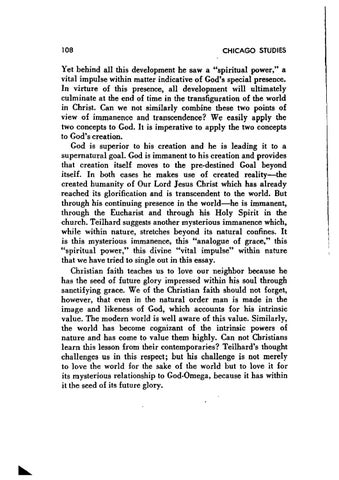 Yet behind all this development he saw a "spiritual power," a vital impulse within matter indicative of God's special presence. In virture of this presence, all development will ultimately culminate at the end of time in the transfiguration of the world in Christ. Can we not similarly combine these two points of view of immanence and transcendence? We easily apply the two concepts to God. It is imperative to apply the two concepts to God's creation. God is superior to his creation and he is leading it to a supernatural goal. God is immanent to his creation and provides that creation itself moves to the pre-destined Goal beyond itself. In both cases he makes use of created reality-the created humanity of Our Lord Jesus Christ which has already reached its glorification and is transcendent to the world. But through his continuing presence in the world-he is immanent, through the Eucharist and through his Holy Spirit in the church. Teilhard suggests another mysterious immanence which, while within nature, stretches beyond its natural confines. It is this mysterious immanence, this "analogue of grace," this "spiritual power," this divine "vital impulse" within nature that we have tried to single out in this essay. Christian faith teaches us to love our neighbor because he has the seed of future glory impressed within his soul through sanctifying grace. We of the Christian faith should not forget, however, that even in the natural order man is made in the image and likeness of God, which accounts for his intrinsic value. The modern world is well aware of this value. Similarly, the world has become cognizant of the intrinsic powers of nature and has come to value them highly. Can not Christians learn this lesson from their contemporaries? Teilhard's thought challenges us in this respect; but his challenge is not merely to love the world for the sake of the world but to love it for its mysterious relationship to God-Omega, because it has within it the seed of its future glory.