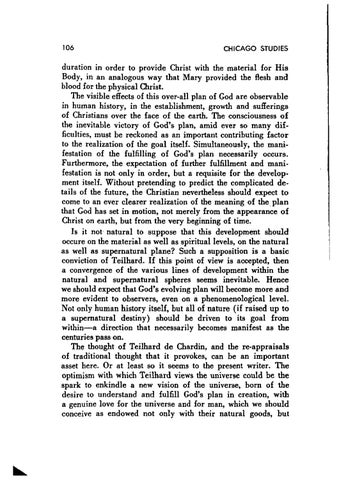 duration in order to provide Christ with the material for His Body, in an analogous way that Mary provided the flesh and blood for the physical Christ. The visible effects of this over-all plan of God are observable in human history, in the establishment, growth and sufferings of Christians over the face of the earth. The consciousness of the inevitable victory of God's plan, amid ever so many difficulties, must be reckoned as an important contributing factor to the realization of the goal itself. Simultaneously, the manifestation of the fulfilling of God's plan necessarily occurs. Furthermore, the expectation of further fulfillment and manifestation is not only in order, but a requisite for the development itself. Without pretending to predict the complicated details of the future, the Christian nevertheless should expect to come to an ever clearer realization of the meaning of the plan that God has set in motion, not merely from the appearance of Christ on earth, but from the very beginning of time. Is it not natural to suppose that this development should occure on the material as well as spiritual levels, on the natural as well as supernatural plane? Such a supposition is a basic conviction of Teilhard. If this point of view is accepted, then a convergence of the various lines of development within the natural and supernatural spheres seems inevitable. Hence we should expect that God's evolving plan will become more and more evident to observers, even on a phenomenological level. Not only human history itself, but all of nature (if raised up to a supernatural destiny) should be driven to its goal from within-a direction that necessarily becomes manifest as the centuries pass on. The thought of Teilhard de Chardin, and the re-appraisals of traditional thought that it provokes, can be an important asset here. Or at least so it seems to the present writer. The optimism with which Teilhard views the universe could be the spark to enkindle a new vision of the universe, born of the desire to understand and fuHill God's plan in creation, with a genuine love for the universe and for man, which we should conceive as endowed not only with their natural goods, but