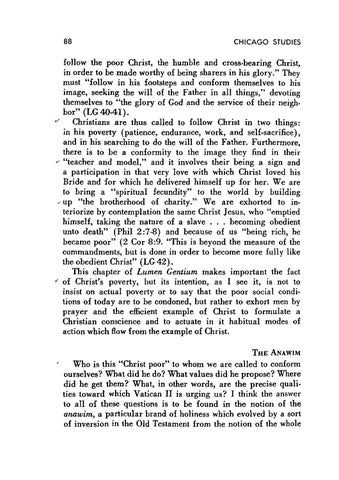 follow the poor Christ, the humble and cross-bearing Christ, in order to be made worthy of being sharers in his glory.&quot; They must &quot;follow in his footsteps and conform themselves to his image, seeking the will of the Father in all things,&quot; devoting themselves to &quot;the glory of God and the service of their neighbor&quot; {LG 40-41). v Christians are thus called to follow Christ in two things: in his poverty (patience, endurance, work, and self-sacrifice), and in his searching to do the will of the Father. Furthermore, there is to be a conformity to the image they find in their &quot;&#39; &quot;teacher and model,&quot; and it involves their being a sign and a participation in that very love with which Christ loved his Bride and for which he delivered himself up for her. We are to bring a &quot;spiritual fecundity&quot; to the world by building &quot;up &quot;the brotherhood of charity.&quot; We are exhorted to interiorize by contemplation the same Christ Jesus, who &quot;emptied himself, taking the nature of a slave . . . becoming obedient unto death&quot; (Phil 2 :7-8) and because of us &quot;being rich, he became poor&quot; (2 Cor 8:9. &quot;This is beyond the measure of the commandments, but is done in order to become more fully like the obedient Christ&quot; (LG 42). This chapter of Lumen Gentium makes important the fact .; of Christ&#39;s poverty, but its intention, as I see it, is not to insist on actual poverty or to say that the poor social conditions of today are to be condoned, but rather to exhort men by prayer and the efficient example of Christ to formulate a Christian conscience and to actuate in it habitual modes of action which flow from the example of Christ. THE ANAWIM

Who is this &quot;Christ poor&quot; to whom we are called to conform ourselves? What did he do? What values did he propose? Where did he get them? What, in other words, are the precise qualities toward which Vatican II is urging us? I think the answer to all of these questions is to be found in the notion of the anawim, a particular brand of holiness which evolved by a sort of inversion in the Old Testament from the notion of the whole