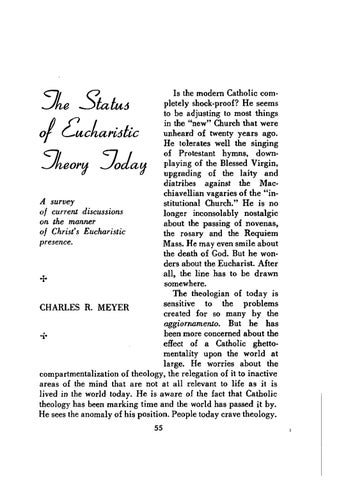 Is the modern Catholic com· pletely shock-proof? He seems to be adjusting to most things in the &quot;new&quot; Church that were unheard of twenty years ago. He tolerates well the singing of Protestant hymns, down· pia ying of the Blessed Virgin, upgrading of the laity and diatribes against the Mac· chiavellian vagaries of the &quot;in· A survey stitutional Church.&quot; He is no of current discussions longer inconsolably nostalgic on the manner about the passing of novenas, of Christ&#39;s Eucharistic the rosary and the Requiem presence. Mass. He may even smile about the death of God. But he won· ders about the Eucharist. After all, the line has to be drawn + somewhere. The theologian of today is sensitive to the problems CHARLES R. MEYER created for so many by the aggiornamento. But he has • been more concerned about the effect of a Catholic ghetto· mentality upon the world at large. He worries about the compartmentalization of theology, the relegation of it to inactive areas of the mind that are not at all relevant to life as it is lived in the world today. He is aware of the fact that Catholic theology has been marking time and the world has passed it by. He sees the anomaly of his position. People today crave theology.