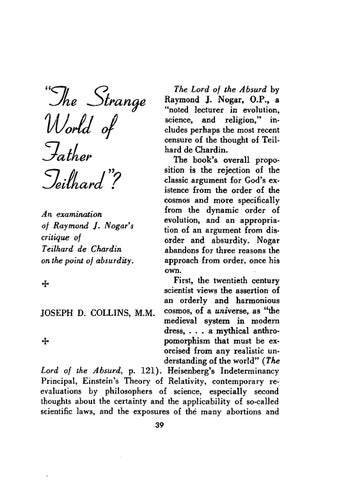 Tke Lord of the Absurd by Raymond J. Nogar, O.P., a &quot;noted lecturer in evolution, science, and religion,&quot; includes perhaps the most recent censure of the thought of Teil· hard de Chardin. The hook&#39;s overall propo· sition is the rejection of the classic argument for God&#39;s ex· istence from the order of the cosmos and more specifically from the dynamic order of evolution, and an appropria· tion of an argument from dis· order and absurdity. Nogar abandons for three reasons the approach from order, once his

own. + First, the twentieth century scientist views the assertion of an orderly and harmonious JOSEPH D. COLLINS, M.M. cosmos, of a universe, as &quot;the medieval system in modern dress, . . • a mythical anthro· + pomorphism that must be ex· orcised from any realistic understanding of the world&quot; (Tke Lord of the Absurd, p. 121). Heisenberg&#39;s Indeterminancy Principal, Einstein&#39;s Theory of Relativity, contemporary reevaluations by philosophers of science, especially second thoughts about the certainty and the applicability of so-called scientific laws, and the exposures of the many abortions and 39