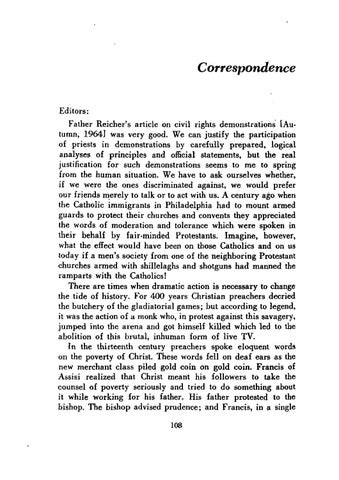 Correspondence Editors: Father Reicher&#39;s article on civil rights demonstrations [Autumn, 1964] was very good. We can justify the participation of priests in demonstrations by carefully prepared, logical analyses of principles and official statements, but the real justification for such demonstrations seems to me to spring from the human situation. We have to ask ourselves whether, if we were the ones discriminated against, we would prefer our friends m,erely to talk or to act with us. A century ago when the Catholic immigrants in Philadelphia had to mount armed guards to protect their churches and convents they appreciated the words of moderation and tolerance which were spoken in their behalf by fair-minded Protestants. Imagine, however, what the effect would have been on those Catholics and on us today if a men&#39;s society from one of the neighboring Protestant churches armed with shillelaghs and shotguns had manned the ramparts with the Catholics! There are times when dramatic action is necessary to change the tide of history. For 400 years Christian preachers decried the butchery of the gladiatorial games; but according to legend, it was the action of a monk who, in protest against this savagery, jumped into the arena and got himself killed which led to the abolition of this brutal, inhuman form of live TV. In the thirteenth century preachers spoke eloquent words on the poverty of Christ. These words fell on deaf ears as the new merchant class piled gold coin on gold coin. Francis of Assisi realized that Christ meant his followers to take the counsel of poverty seriously and tried to do something about it while working for his father. His father protested to the bishop. The bishop advised prudence; and Francis, in a single