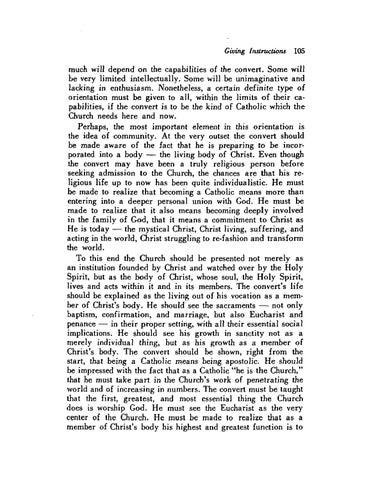 much will depend on the capabilities of the convert. Some will be very limited intellectually. Some will be unimaginative and lacking in enthusiasm. Nonetheless, a certain definite type of orientation must be given to all, within the limits of their caÂˇ pabilities, if the convert is to be the kind of Catholic which the Church needs here and now. Perhaps, the most important element in this orientation is the idea of community. At the very outset the convert should be made aware of the fact that he is preparing to be incorÂˇ porated into a body - the living body of Christ. Even though the convert may have been a truly religious person before seeking admission to the Church, the chances are that his reÂˇ ligious life up to now has been quite individualistic. He must be made to realize that becoming a Catholic means more than entering into a deeper personal union with God. He must be made to realize that it also means becoming deeply involved in the family of God, that it means a commitment to Christ as He is today - the mystical Christ, Christ living, suffering, and acting in the world, Christ struggling to re-fashion and transform the world. To this end the Church should be presented not merely as an institution founded by Christ and watched over by the Holy Spirit, but as the body of Christ, whose soul, the Holy Spirit, lives and acts within it and in its members. The convert&#39;s life should be explained as the living out of his vocation as a member of Christ&#39;s body. He should see the sacraments - not only baptism, confirmation, and marriage, but also Eucharist and penance- in their proper setting, with all their essential social implications. He should see his growth in sanctity not as a merely individual thing, but as his growth as a member of Christ&#39;s body. The convert should be shown, right from the start, that being a Catholic means being apostolic. He should be impressed with the fact that as a Catholic &quot;he is the Church,&quot; that he must take part in the Church&#39;s work of penetrating the world and of increasing in numbers. The convert must be taught that the first, greatest, and most essential thing the Church does is worship God. He must see the Eucharist as the very center of the Church. He must be made to realize that as a member of Christ&#39;s body his highest and greatest function is to