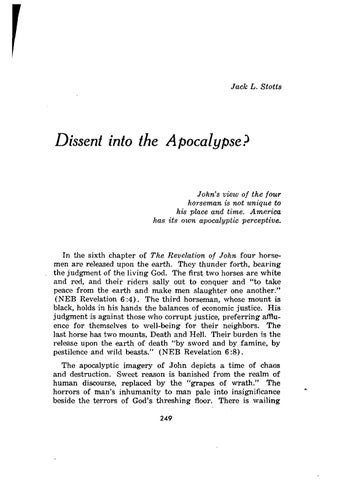 Dissent into the Apocalypse~

John&#39;s view of the four horseman is not unique to his place and time. America has its own apocalyptic perceptive.

In the sixth chapter of The Revelation of John four horsemen are released upon the earth. They thunder forth, bearing the judgment of the living God. The first two horses are white and red, and their riders sally out to conquer and &quot;to take peace from the earth and make men slaughter one another.&quot; (NEB Revelation 6 :4). The third horseman, whose mount is black, holds in his hands the balances of economic justice. His judgment is against those who corrupt justice, preferring affluence for themselves to well-being for their neighbors. The last horse has two mounts, Death and Hell. Their burden is the release upon the earth of death &quot;by sword and by famine, by pestilence and wild beasts.&quot; (NEB Revelation 6 :8). The apocalyptic imagery of John depicts a time of chaos and destruction. Sweet reason is banished from the realm of human discourse, replaced by the &quot;grapes of wrath.&quot; The horrors of man&#39;s inhumanity to man pale into insignificance beside the terrors of God&#39;s threshing floor. There is wailing 249