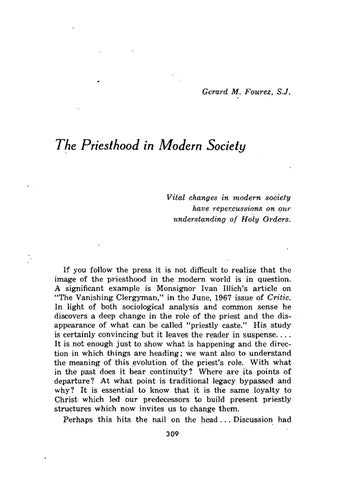 The Priesllzood in Modern Society

If you follow the press it is not difficult to realize that the image of the priesthood in the modern world is in question. A significant example is Monsignor Ivan Illich&#39;s article on &quot;The Vanishing Clergyman,&quot; in the June, 1967 issue of Critic. In light of both sociological analysis and common sense he discovers a deep change in the role of the priest and the disappearance of what can be called &quot;priestly caste.&quot; His study is certainly convincing but it leaves the reader in suspense .... It is not enough just to show what is happening and the direction in which things are heading; we want also to understand the meaning of this .evolution of the priest&#39;s role. With what in the past does it bear continuity? Where are its points of departure? At what point is traditional legacy bypassed and why? It is essential to know that it is the same loyalty to Christ which led our predecessors to build present priestly structures which now invites us to change them. Perhaps this hits the nail on the head ... Discussion had 309