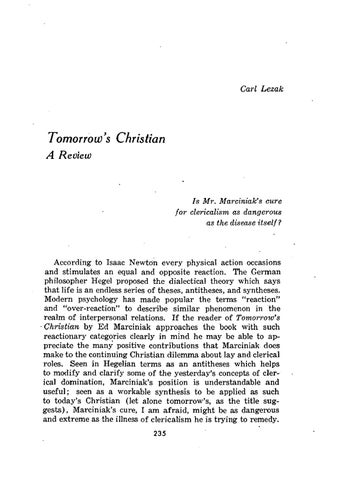 ls M1-. Marciniak&#39;s cure for clericalism as dangerous as the disease itself?

According to Isaac Newton every physical action occasions and stimulates an equal and opposite reaction. The German philosopher Hegel proposed the dialectical themÂˇy which says that Iife is an endless series of theses, antitheses, and syntheses. Modern psychology has made popular the terms &quot;reaction&quot; and &quot;over-reaction&quot; to describe similar phenomenon in the rea lm of interpersonal relations. If the rea der of Tomorrow&#39; s Âˇ Christian by Ed Marciniak approaches the book with such reactionary categories clearly in mind he may be able to appreciate the many positive contributions that Marciniak does make to the continuing Christian dilemma about lay and clerical roles. Seen in Hegelian terms as an antitheses which helps to modify and clarify sorne of the yesterday&#39;s concepts of clerical domination, Marciniak&#39;s position is understandable and useful; seen as a workable synthesis to be applied as such to today&#39;s Christian (let alone tomorrow&#39;s, as the title suggests), Marciniak&#39;s cure, I am afraid, might be as dangerous and extreme as the illness of clericalism he is trying to remedy. 235