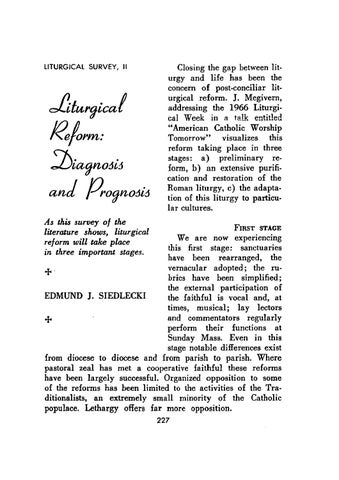 fe/orm: ::biagno&amp;i:J and P,ogno&amp;i:J As this survey of the literature shows, liturgical reform will take place in three important stages.

Closing the gap between liturgy and life has been the concern of post-conciliar liturgical reform. J. Megivern, addressing the 1966 Liturgical Week in a talk entitled &quot;American Catholic Worship Tomorrow&quot; visualizes this reform taking place in three stages: a) preliminary reform, b) an extensive purification and restoration of the Roman liturgy, c) the adaptation of this liturgy to particular cultures. FIRST STAGE

We are now experiencing this first stage: sanctuaries have heen rearranged, the vernacular adopted; the rubrics have been simplified; the external participation of EDMUND ]. SIEDLECKI the faithful is vocal and, at times, musical; lay lectors and commentators regularly + perform their functions at Sunday Mass. Even in this stage notable differences exist from diocese to diocese and from parish to parish. Where pastoral zeal has met a cooperative faithful these reforms have been largely successful. Organized opposition to some of the reforms has been limited to the activities of the Traditionalists, an extremely small minority of the Catholic populace. Lethargy offers far more opposition. 227