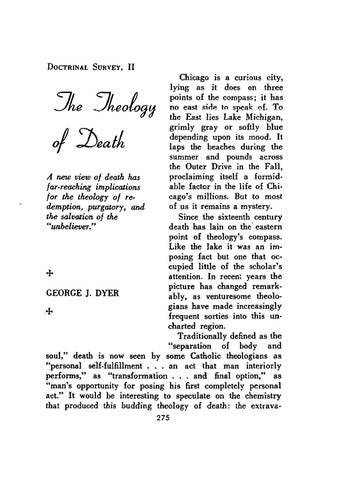 Chicago is a curious city, lying as it does on three points of the compass; it has no east sitle tn speak of. To the East lies Lake Michigan, grimly gray or softly blue depending upon its mood. It laps the beaches during the summer and pounds across the Outer Drive in the Fall, proclaiming itself a formidA new view of death has able factor in the life of Chifar-reaching implications cago&#39;s millions. But to most for the theology of reof us it remains a mystery. demption, purgatory, and the salvation of the Since the sixteenth century &quot;unbeliever.&quot; death has lain on the&#39; eastern point of theology&#39;s compass. Like the lake it was an imposing fact but one that occupied little of the scholar&#39;s + attention. In recen: years the picture has changed remarkGEORGE J. DYER ably, as venturesome theologians have made increasingly + frequent sorties into this uncharted region. Traditionally defined as the &quot;separation of body and soul,&quot; death is now seen by some Catholic theologians as &quot;personal self-fulfillment . . . an act that man interiorly performs,&quot; as &quot;transformation . . . and final option,&quot; as &quot;man&#39;s opportunity for posing his first completely personal act.&quot; It would be interesting to speculate on the chemistry that produced this budding theology of death: the extrava275