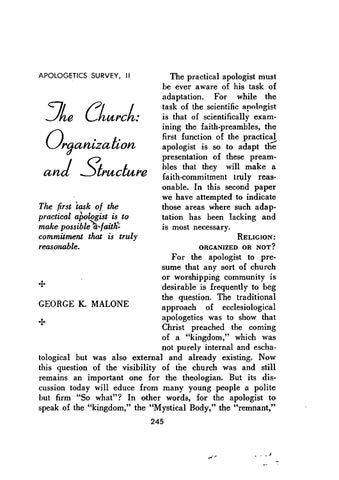 Organization and Struclure The first task of the practical apologist is to make possible&#39;iz,faitltcommitment that is truly reasonable.

The practical apologist must be ever a ware of his task of adaptation. For while the task of the scientific apologist is that of scientifically examining the faith-preambles, the first function of the practical __.. apologist is so to adapt tlie presentation of these preambles that they will make a faith-commitment truly reasonable. In this second paper we have attempted to indicate those areas where such adaptation has been lacking and is most necessary. RELIGION: ORGANIZED OR NOT?

For the apologist to presume that any sort of church or worshipping community is + desirable is frequently to beg the question. The traditional GEORGE K. MALONE approach of ecclesiological apologetics was to show that + Christ preached the coming of a &quot;kingdom,&quot; which was not purely internal and eschatological but was also external and already existing. Now this question of the visibility of the church was and still remains an important one for the theologian. But its discussion today will educe from many young people a polite but firm &quot;So what&quot;? In other words, for the apologist to speak of the &quot;kingdom,&quot; the &quot;Mystical Body,&quot; the &quot;remnant,&quot; 245