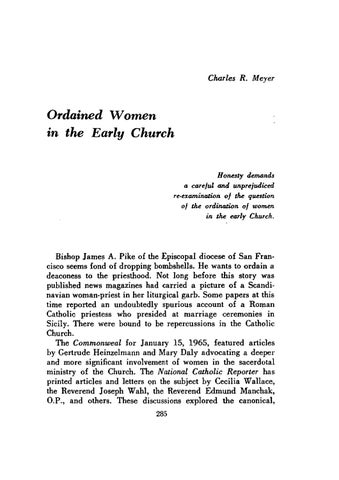 Ordained Women in the Early Church

Honesty de=nds a careful and unprejudiced re-examination of the questi&lt;&gt;n of the ordination of women in the early Church.

Bishop James A. Pike of the Episcopal diocese of San Francisco seems fond of dropping bombshells. He wants to ordain a deaconess to the priesthood. Not long before this story was published news magazines had carried a picture of a Scandinavian woman-priest in her liturgical garb. Some papers at this time reported an undoubtedly spurious account of a Roman Catholic priestess who presided at marriage ceremonies in Sicily. There were bound to be repercussions in the Catholic Church. The Commonweal for January 15, 1965, featured articles by Gertrude Heinzelmann and Mary Daly advocating a deeper and more significant involvement of women in the sacerdotal ministry of the Church. The National Catholic Reporter has printed articles and letters on the subject by Cecilia Wallace, the Reverend Joseph Wahl, the Reverend Edmund Manchak, O.P., and others. These discussions explored the canonical, 285