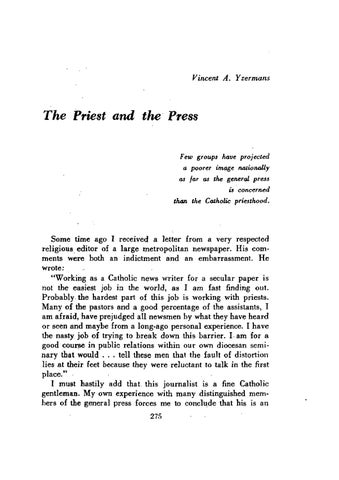 as far as the general press

i! concerned than the Catholic priesthood.

Some time ago I received a letter from a very respected religious editor of a large metropolitan newspaper. His comments w~re both an indictment and an embarrassment. He wrote: &quot;Working as a Catholic news writer for a secular paper is not the easiest job in the world, as I am fast finding out. Probably the hardest part of this job is working with priests. Many of the pastors and a good percentage of the assistants, l am afraid, have prejudged all newsmen by what they have heard or seen and maybe from a long-ago personal experience. I have the nasty job of trying to break down this barrier. r. am for a good course in public relations within our own diocesan seminary that would ... tell these men that the fault of distortion lies at their feet because they were reluctant to talk in the first place.&quot; I must hastily add that. this journalist is a fine Catholic gentleman. My own experience with many distinguished members of the general press forces me to conclude that his is an 275