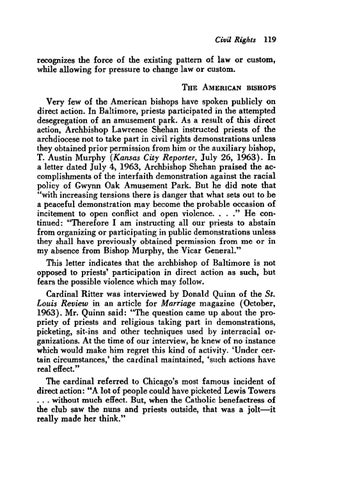 recognizes the force of the existing pattern of law or custom, while allowing for pressure to change law or custom. THE AMERICAN BISHOPS

Very few of the American bishops have spoken publicly on direct action. In Baltimore, priests participated in the attempted desegregation of an amusement park. As a result of this direct action, Archbishop Lawrence Shehan instructed priests of the archdiocese not to take part in civil rights demonstrations unless they obtained prior permission from him or the auxiliary bishop, T. Austin Murphy (Kansas City Reporter, July 26, 1963). In a letter dated July 4, 1963, Archbishop Shehan praised the ac路 complishments of the interfaith demonstration against the racial policy of Gwynn Oak Amusement Park. But he did note that &quot;with increasing tensions there is danger that what sets out to be a peaceful demonstration may become the probable occasion of incitement to open conflict and open violence. . . .&quot; He con路 tinued: &quot;Therefore I am instructing all our priests to abstain from organizing or participating in public demonstrations unless they shall have previously obtained permission from me or in my absence from Bishop Murphy, the Vicar General.&quot; This letter indicates that the archbishop of Baltimore is not opposed to priests&#39; participation in direct action as such, but fears the possible violence which may follow. Cardinal Ritter was interviewed by Donald Quinn of the St. Louis Review in an article for Marriage magazine (October, 1963). Mr. Quinn said: &quot;The question came up about the propriety of priests and religious taking part in demonstrations, picketing, sit-ins and other techniques used by interracial or路 ganizations. At the time of our interview, he knew of no instance which would make him regret this kind of activity. &#39;Under cer路 tain circumstances,&#39; the cardinal maintained, &#39;such actions have real effect.&quot; The cardinal referred to Chicago&#39;s most famous incident of direct action: &quot;A lot of people could have picketed Lewis Towers ... without much effect. But, when the Catholic benefactress of the club saw the nuns and priests outside, that was a jolt-it really made her think.&quot;