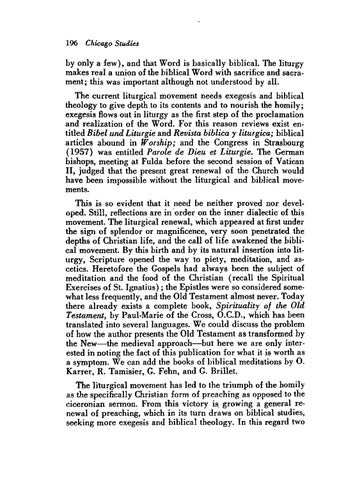 by only a few), and that Word is basically biblical. The liturgy makes real a union of the biblical Word with sacrifice and sacrament; this was important although not understood by all. The current liturgical movement needs exegesis and biblical theology to give depth to its contents and to nourish the homily; exegesis flows out in liturgy as the first step of the proclamation and realization of the Word. For this reason reviews exist en&#39; titled Bibel und Liturgie and Revista biblica y liturgica; biblical articles abound in Worship; and the Congress in Strasbourg (1957) was entitled Parole de Dieu et Liturgie. The German bishops, meeting at Fulda before the second session of Vatican II, judged that the present great renewal of the Church would have been impossible without the liturgical and biblical movements. This is so evident that it need be neither proved nor developed. Still, reflections are in Âˇorder on the inner dialectic of this movement. The liturgical renewal, which appeared at first under the sign of splendor or magnificence, very soon penetrated the depths of Christian life, and the call of life awakened the biblical movement. By this birth and by its natural insertion into liturgy, Scripture opened the way to piety, meditation, and ascetics. Heretofore the Gospels had always been the subject of meditation and the food of the Christian (recall the Spiritual Exercises of St. Ignatius) ; the Epistles were so considered somewhat less frequently, and the Old Testament almost never. Today there already exists a complete book, Spirituality of the Old Testament, by Paul-Marie of the Cross, O.C.D., which has been translated into several languages. We could discuss the problem of how the author presents the Old Testament as transformed by the New-the medieval approach-but here we are only interested in noting the fact of this publication for what it is worth as a symptom. We can add the books of biblical meditations by 0. Karrer, R. Tamisier, G. Fehn, and G. Brillet. The liturgical movement has led to the triumph of the homily as the specifically Christian form of preaching as opposed to the ciceronian sermon. From this victory is. growing a general renewal of preaching, which in its turn draws on biblical studies, seeking more exegesis and biblical theology. In this regard two