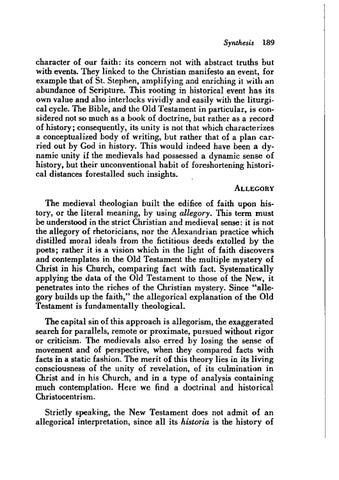 character of our faith: its concern not with abstract truths but with events. They linked to the Christian manifesto an event, for example that of St. Stephen, amplifying and enriching it wiLL an abundance of Scripture. This rooting in historical event has its own value and also interlocks vividly and easily with the liturgical cycle. The Bible, and the Old Testament in particular, is considered not so much as a book of doctrine, but rather as a record of history; consequently, its unity is not that which characterizes a conceptualized body of writing, but rather that of a plan car路 ried out by God in history. This would indeed have been a dy路 namic unity if the medievals had possessed a dynamic sense of history, but their unconventional habit of foreshortening histori路 cal distances forestalled such insights. ALLEGORY

The medieval theologian built the edifice of faith upon his路 tory, or the literal meaning, by using allegory. This term must be understood in the strict Christian and medieval sense: it is not the allegory of rhetoricians, nor the Alexandrian practice which distilled moral ideals from the fictitious deeds extolled by the poets; rather it is a vision which in the light of faith discovers and contemplates in the Old Testament the multiple mystery of Christ in his Church, comparing fact with fact Systematically applying the data of the Old Testament to those of the New, it penetrates into the riches of the Christian mystery. Since &quot;allegory builds up the faith,&quot; the allegorical explanation of the Old Testament is fundamentally theologicaL The capital sin of this approach is allegorism, the exaggerated search for parallels, remote or proximate, pursued without rigor or criticism. The medievals also erred by losing the sense of movement and of perspective, when they compared facts with facts in a static fashion. The merit of this theory lies in its living consciousness of the unity of revelation, of its culmination in Christ and in his Church, and in a type of analysis containing much contemplation. Here we find a doctrinal and historical Christocentrism. Strictly speaking, the New Testament does not admit of an allegorical interpretation, since all its historia is the history of