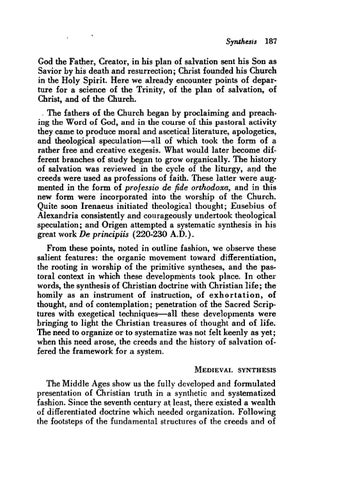 God the Father, Creator, in his plan of salvation sent his Son as Savior by his death and resurrection; Christ founded his Church in the Holy Spirit. Here we already encounter points of departure for a science of the Trinity, of the plan of salvation, of Christ, and of the Church . . The fathers of the Church began by proclaiming and preaching the Word of God, and in the course of this pastoral activity they came to produce moral and asceticalliterature, apologetics, and theological speculation-all of which took the form of a rather free and creative exegesis. What would later become different branches of study began to grow organically. The history of salvation was reviewed in the cycle of the liturgy, and the creeds were used as professions of faith. These latter were augmented in the form of professio de fide orthodoxa, and in this new form were incorporated into the worship of the Church. Quite soon lrenaeus initiated theological thought; Eusebius of Alexandria consistently and courageously undertook theological speculation; and Origen attempted a systematic synthesis in his great work De principiis (220-230 A.D.). From these points, noted in outline fashion, we observe these salient features: the organic movement toward differentiation, the rooting in worship of the primitive syntheses, and the pastoral context in which these developments took place. In other words, the synthesis of Christian doctrine with Christian life; the homily as an instrument of instruction, of exhortation, of thought, and of contemplation; penetration of the Sacred Scriptures with exegetical techniques-all these developments were bringing to light the Christian treasures of thought and of life. The need to organize or to systematize was not felt keenly as yet; when this need arose, the creeds and the history of salvation offered the framework for a system. MEDIEVAL SYNTHESIS

The Middle Ages show us the fully developed and formulated presentation of Christian truth in a synthetic and systematized fashion. Since the seventh century at least, there existed a wealth of differentiated doctrine which needed organization. Following the footsteps of the fundamental structures of the creeds and of