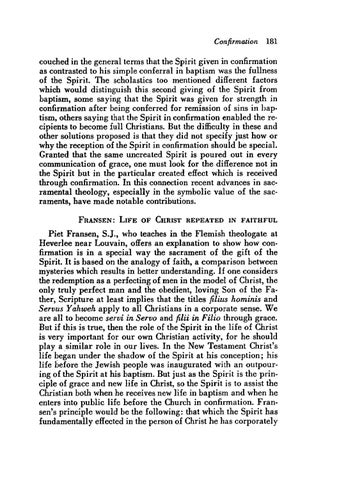 Piet Fransen, S.J ., who teaches in the Flemish theologate at Heverlee near Louvain, offers an explanation to show how confirmation is in a special way the sacrament of the gift of the Spirit. It is based on the analogy of faith, a comparison between mysteries which results in better understanding. If one considers the redemption as a perfecting of men in the model of Christ, the only truly perfect man and the obedient, loving Son of the Father, Scripture at least implies that the titles filius hominis and Servus Yahweh apply to all Christians in a corporate sense. We are all to become servi in Servo and filii in Filio through grace. But if this is true, then the role of the Spirit in the life of Christ is very important for our own Christian activity, for he should play a similar role in our lives. In the New Testament Christ&#39;s life began under the shadow of the Spirit at his conception; his life before the Jewish people was inaugurated with an outpouring of the Spirit at his baptism. But just as the Spirit is the principle of grace and new life in Christ, so the Spirit is to assist the Christian both when he receives new life in baptism and when he enters into public life before the Church in confirmation. Fransen&#39;s principle would be the following: that which the Spirit has fundamentally effected in the person of Christ he has corporately