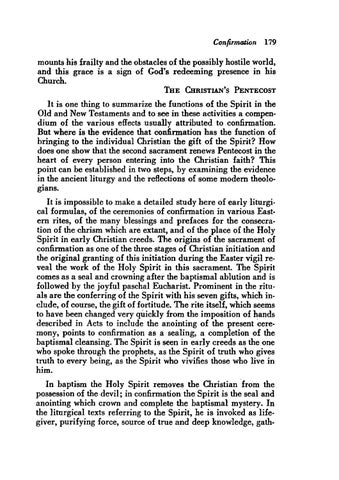 mounts his frailty and the obstacles of the possibly hostile world, and this grace is a sign of God&#39;s redeeming presence in his Church. THE CHRISTIAN&#39;S PENTECOST

It is one thing to summarize the functions of the Spirit in the Old and New Testaments and to see in these activities a compendium of the various effects usually attributed to confirmation. But where is the evidence that confirmation has the function of bringing to the individual Christian the gift of the Spirit? How does one show that the second sacrament renews Pentecost in the heart of every person entering into the Christian faith? This point can be established in two steps, by examining the evidence in the ancient liturgy and the reflections of some modern theoloÂˇ . gJans.

It is impossible to make a detailed study here of early liturgical formulas, of the ceremonies of confirmation in various EastÂˇ ern rites, of the many blessings and prefaces for the consecration of the chrism which are extant, and of the place of the Holy Spirit in early Christian creeds. The origins of the sacrament of confirmation as one of the three stages of Christian initiation and the original granting of this initiation during the Easter vigil reveal the work of the Holy Spirit in this sacrament. The Spirit comes as a seal and crowning after the baptismal ablution and is followed by the joyful paschal Eucharist. Prominent in the rituals are the conferring of the Spirit with his seven gifts, which include, of course, the gift of fortitude. The rite itself, which seems to have been changed very qUickly from the imposition of hands described in Acts to include the anointing of the present ceremony, points to confirmation as a sealing, a completion of the baptismal cleansing. The Spirit is seen in early creeds as the one who spoke through the prophets, as the Spirit of truth who gives truth to every being, as the Spirit who vivifies those who live in him. In bapti8m the Holy Spirit removes the Christian from the possession of the devil; in confirmation the Spirit is the seal and anointing which crown and complete the baptismal mystery. In the liturgical texts referring to the Spirit, he is invoked as lifegiver, purifying force, source of true and deep knowledge, gath-