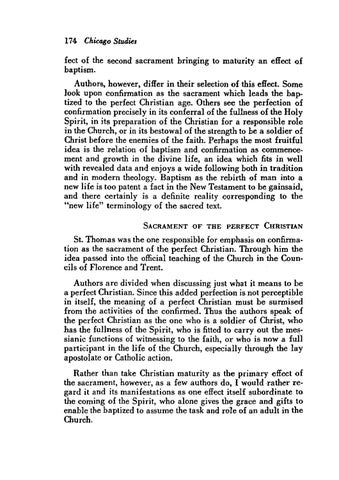 feet of the second sacrament bringing to maturity an effect of baptism. Authors, however, differ in their selection of this effect. Some look upon confirmation as the sacrament which leads the baptized to the perfect Christian age. Others see the perfection of confirmation precisely in its conferral of the fullness of the Holy Spirit, in its preparation of the Christian for a responsible role in the Church, or in its bestowal of the strength to be a soldier of Christ before the enemies of the faith. Perhaps the most fruitful idea is the relation of baptism and confirmation as commencement and growth in the divine life, an idea which fits in well with revealed data and enjoys a wide following both in tradition and in modern theology. Baptism as the rebirth of man into a new life is too patent a fact in the New Testament to he gainsaid, and there certainly is a definite reality corresponding to the &quot;new life&quot; terminology of the sacred text. SACRAMENT OF THE PERFECT CHRISTIAN

St. Thomas was the one responsible for emphasis on confirmation as the sacrament of the perfect Christian. Through him the idea passed into the official teaching of the Church in the Councils of Florence and Trent. Authors are divided when discussing just what it means to be a perfect Christian. Since this added perfection is not perceptible in itself, the meaning of a perfect Christian must be surmised from the activities of the confirmed. Thus the authors speak of the perfect Christian as the one who is a soldier of Christ, who has the fullness of the Spirit, who is fitted to carry out the messianic functions of witnessing to the faith, or who is now a full participant in the life of the Church, especially through the lay apostolate or Catholic action. Rather than take Christian maturity as the primary effect of the sacrament, however, as a few authors do, I would rather regard it and its manifestations as one effect itself subordinate to the coming of the Spirit, who alone gives the grace and gifts to enable the baptized to assume the task and role of an adult in the Church.