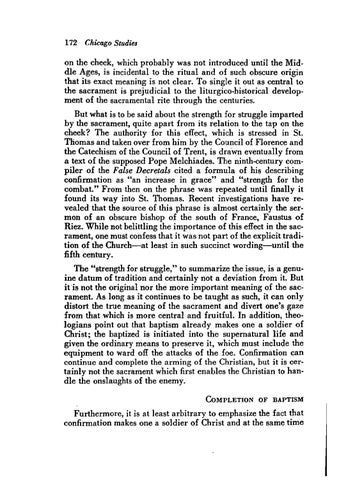 on the cheek, which probably was not introduced until the Middle Ages, is incidental to the ritual and of such obscure origin that its exact meaning is not clear. To single it out as central to the sacrament is prejudicial to the liturgico-historical development of the sacramental rite through the centuries. But what is to be said about the strength for struggle imparted by the sacrament, quite apart from its relation to the tap on the cheek? The authority for this effect, which is stressed in St. Thomas and taken over from him by the Council of Florence and the Catechism of the Council of Trent, is drawn eventually from a text of the supposed Pope Melchiades. The ninth-century compiler of the False Decretals cited a formula of his describing confirmation as &quot;an increase in grace&quot; and &quot;strength for the combat.&quot; From then on the phrase was repeated until finally it found its way into St. Thomas. Recent investigations have revealed that the source of this phrase is almost certainly the sermon of an obscure bishop of the south of France, Faustus of Riez. While not belittling the importance of this effect in the sacrament, one must confess that it was not part of the explicit tradition of the Church-at least in such succinct wording-until the :fifth century. The &quot;strength for struggle,&quot; to summarize the issue, is a genuine datum of tradition and certainly not a deviation from it. But it.is not the original nor the more important meaning of the sacrament. As long as it continues to be taught as such, it can only distort the true meaning of the sacrament and divert one&#39;s gaze from that which is more central and fruitful. In addition, theologians point out that baptism already makes one a soldier of Christ; the baptized is initiated into the supernatural life and given the ordinary means to preserve it, which must include the equipment to ward off the attacks of the foe. Confirmation can continue and complete the arming of the Christian, but it is certainly not the sacrament which first enables the Christian to handle the onslaughts of the enemy. CoMPLETION OF BAPTISM

Furthermore, it is at least arbitrary to emphasize the fact that confirmation makes one a soldier of Christ and at the same time