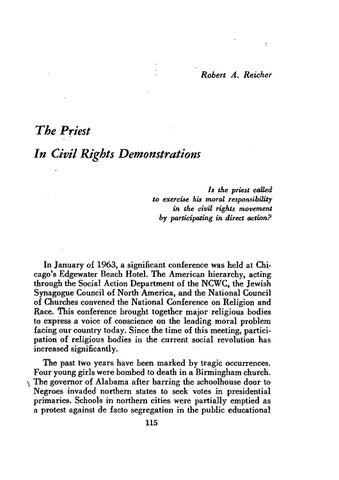 The Priest In Civil Rights Demonstrations Is the priest called to exercise his moral re.sponsibility in the civil rights movement by participating in direct actian?

In January of 1963, a significant conference was held at ChiÂˇ cago&#39;s Edgewater Beach Hotel. The American hierarchy, acting through the Social Action Department of the NCWC, the Jewish Synagogue Council of North America, and the National Council of Churches convened the National Conference on Religion and Race. This conference brought together major religious bodies to express a voice of conscience on the leading moral problem facing our country today. Since the time of this meeting, particiÂˇ pation of religious bodies in the current social revolution has increased significantly. The past two years have been marked by tragic occurrences. Four young girls were bombed to death in a Birmingham church. \ The governor of Alabama after barring the schoolhouse door to Negroes invaded northern states to seek votes in presidential primaries. Schools in northern cities were partially emptied as a protest against de facto segregation in the public educational 115