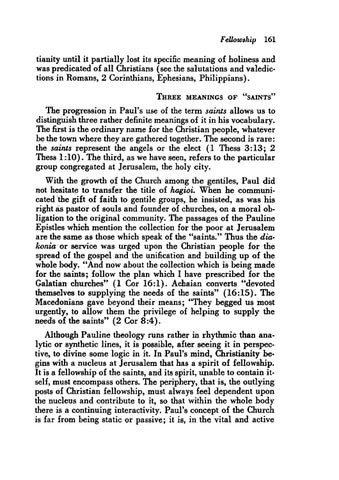 tianity until it partially lost its specific meaning of holiness and was predicated of all Christians ( see.the salutations and valedic· lions in Romans, 2 Corinthians, Ephesians, Philippians). THREE MEANINGS oF

The progression in Paul&#39;s use of the term saints allows us to distingUish three rather definite meanings of it in his vocabulary. The first is the ordinary name for the Christian people, whatever be the town where they are gathered together. The second is rare: the saints represent the angels or the elect ( 1 Thess 3:13; 2 Thess 1 :10). The third, as we have seen, refers to the particular group congregated at Jerusalem, the holy city. With the growth of the Church among the gentiles, Paul did not hesitate to transfer the title of hagioi. When he communicated ·the gift of faith to gentile groups, he insisted, as was his right as pastor of souls and founder of churches, on a moral obligation to the original community. The passages of the Pauline Epistles which mention the collection for the poor at Jerusalem are the same as those which speak of the &quot;saints.&quot; Thus the diakonia or service was urged upon the Christian people for the spread of the gospel and the unification and building up of the whole body. &quot;And now about the collection which is being made for the saints; follow the plan which I have prescribed for the Galatian churches&quot; (1 Cor 16:1). Achaian converts &quot;devoted themselves to supplying the needs of the saints&quot; (16:15). The Macedonians gave beyond their means; &#39;&#39;They begged us most urgently, to allow them the privilege of helping to supply the needs of the saints&quot; (2 Cor 8:4). Although Pauline theology runs rather in rhythmic than ana· lytic or synthetic lines, it is possible, after seeing it in perspective, to divine some logic in it. In Paul&#39;s mind, Christianity be· gins with a nucleus at Jerusalem that has a spirit of fellowship. It is a fellowship of the saints, and its spirit, unable to contain it· self, must encompass others. The periphery, that is, the outlying posts of Christian fellowship, must always feel dependent upon the nucleus and contribute to it, so that within the whole body there is a continuing interactivity. Paul&#39;s concept of the Church is far from being static or passive; it is, in the vital and active