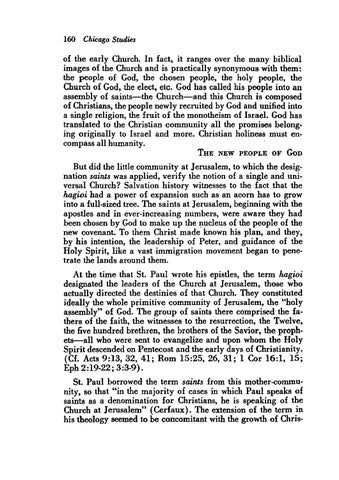 of the early Church. In fact, it ranges over the many biblical images of the Church and is practically synonymous with them: the people of God, the chosen people, the holy people, the Church of God, the elect, etc. God has called his people into an assembly of saints--the Church-and this Church is composed of Christians, the people newly recruited by God and unified into a single religion, the fruit of the monotheism of Israel. God has translated to the Christian community all the promises belong· ing originally to Israel and more. Christian holiness must encompass all humanity. THE NEW PEOPLE OF GoD But did the little community at Jerusalem, to which the desig· nation saints was applied, verify the notion of a single and uni· versal Church? Salvation history witnesses to the fact that the hagioi had a power of expansion such as an acorn has to grow into a full-sized tree. The saints at Jerusalem, beginning with the apostles and in ever-increasing numbers, were aware they had been chosen by God to make up the nucleus of the people of the new covenant. To them Christ made known his plan, and they, by his intention, the leadership of Peter, and guidance of the Holy Spirit, like a vast immigration movement began to pene· trate the lands around them. At the time that St. Paul wrote his epistles, the term hagioi designated the leaders of the Church at Jerusalem, those who actually directed the destinies of that Church. They constituted ideally the whole primitive community of Jerusalem, the &quot;holy assembly&quot; of God. The group of saints there comprised the fa· thers of the faith, the witnesses to the resurrection, the Twelve, the five hundred brethren, the brothers of the Savior, the prophets--all who were sent to evangelize and upon whom the Holy Spirit descended on Pentecost and the early days of Christianity. (Cf. Acts 9:13, 32, 41; Rom 15:25, 26, 31; 1 Cor 16:1, 15; Eph 2:19-22; 3:3-9). St. Paul borrowed the term saints from this mother-commu· nity, so that &quot;in the majority of cases in which Paul speaks of saints as a denomination for Christians, he is speaking of the Church at Jerusalem&quot; ( Cerfaux). The extension of the term in his theology seemed to be concomitant with the growth of Chris·