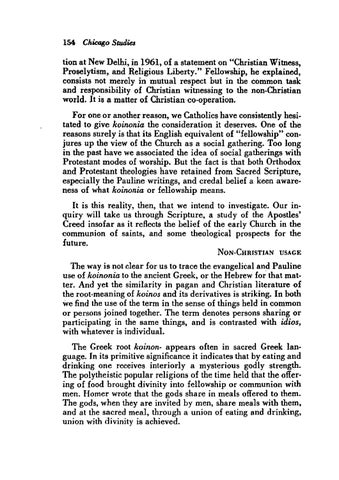 tion at New Delhi, in 1961, of a statement on &quot;Christian Witness, Proselytism, and Religious Liberty.&quot; Fellowship, he explained, consists not merely in mutual respect but in the common task and responsibility of Christian witnessing to the non-Christian world. It is a matter of Christian co-operation. For one or another reason, we Catholics have consistently hesitated to give koinonia the consideration it deserves. One of the reasons surely is that its English equivalent of &quot;fellowship&quot; conjures up the view of the Church as a social gathering. Too long in the past have we associated the idea of social gatherings with Protestant modes of worship. But the fact is that both Orthodox and Protestant theologies have retained from Sacred Scripture, especially the Pauline writings, and credal belief a keen awareness of what koinonia or fellowship means. It is this reality, then, that we intend to investigate. Our inquiry will take us through Scripture, a study of the Apostles&#39; Creed insofar as it reflects the belief of the early Church in the communion of saints, and some theological prospects for the future. NoN-CHRISTIAN usAGE

The way is not clear for us to trace the evangelical and Pauline use of koinonia to the ancient Greek, or the Hebrew for that matter. And yet the similarity in pagan and Christian literature of the root-meaning of koinos and its derivatives is striking. In both we find the use of the term in the sense of things held in common or persons joined together. The term denotes persons sharing or participating in the same things, and is contrasted with idios, with whatever is individual. The Greek root koinon- appears often in sacred Greek lanÂˇ guage. In its primitive significance it indicates that by eating and drinking one receives interiorly a mysterious godly strength. The polytheistic popular religions of the time held that the offering of food brought divinity into fellowship or communion with men. Homer wrote that the gods share in meals offered to them. The gods, when they are invited by men, share meals with them, and at the sacred meal, through a union of eating and drinking, union with divinity is achieved.