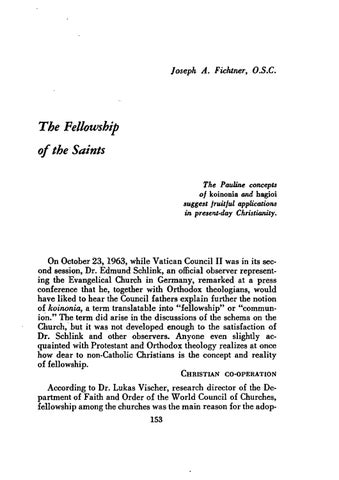 The Fellowship of the Saints The Pauline concep13 of koinonia and hagioi suggest fruitful applications in presen.t·day ChriJtian.ity.

On October 23, 1963, while Vatican Council II was in its sec· ond session, Dr. Edmund Schlink, an official observer represent· ing the Evangelical Church in Germany, remarked at a press conference that he, together with Orthodox theologians, would have liked to hear the Council fathers explain further the notion of koinonia, a term translatable into &quot;fellowship&quot; or &quot;commun· ion.&quot; The term did arise in the discussions of the schema on the Church; but it was not developed enough to the satisfaction of Dr. Schlink and other observers. Anyone even slight!y ac· quainted with Protestant and Orthodox theology realizes at once how dear to non-Catholic Christians is the concept and reality of fellowship. CHRISTIAN CO·OPERATION

According to Dr. Lukas Vischer, research director of the De· partment of Faith and Order of the World Council of Churches, fellowship among the churches was the main reason for the adop· 153