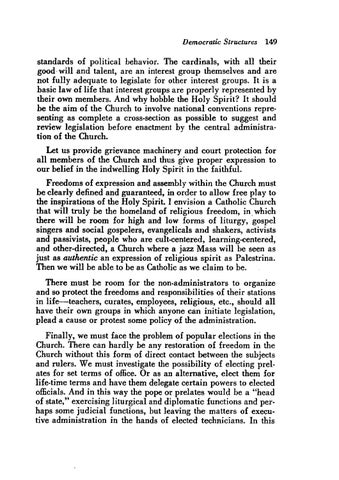 standards of political behavior. The cardinals, with all their goodÂˇ will and talent, are an interest group themselves and are not fully adequate to legislate for other interest groups. It is a basic law of life that interest groups are properly represented by their own members. And why hobble the Holy Spirit? It should be the aim of the Church to involve national conventions representing as complete a cross-section as possible to suggest and review legislation before enactment by the central administration of the Church. Let us provide grievance machinery and court protection for all members of the Church and thus give proper expression to our belief in the indwelling Holy Spirit in the faithful. Freedoms of expression and assembly within the Church must be clearly defined and guaranteed, in order to allow free play to the inspirations of the Holy Spirit. I envision a Catholic Church that will truly be the homeland of religious freedom, in which there will he room for high and low forms of liturgy, gospel singers and social gospelers, evangelicals and shakers, activists and passivists, people who are cult-centered, learning-centered, and other-directed, a Church where a jazz Mass will be seen as just as authentic an expression of religious spirit as Palestrina. Then we will he able to be as Catholic as we claim to be. There must be room for the non-administrators to organize and so protect the freedoms and responsibilities of their stations in life--teachers, curates, employees, religious, etc., should all have their own groups in which anyone can initiate legislation, plead a cause or protest some policy of the administration. Finally, we must face the problem of popular elections in the Church. There can hardly be any restoration of freedom in the Church without this form of direct contact between the subjects and rulers. We must investigate the possibility of electing prelates for set terms of office. Or as an alternative, elect them for life-time terms and have them delegate certain powers to elected officials. And in this way the pope or prelates would be a &quot;head of state,&quot; exercising liturgical and diplomatic functions and perhaps some judicial functions, hut leaving the matters of executive administration in the hands of elected technicians. In this