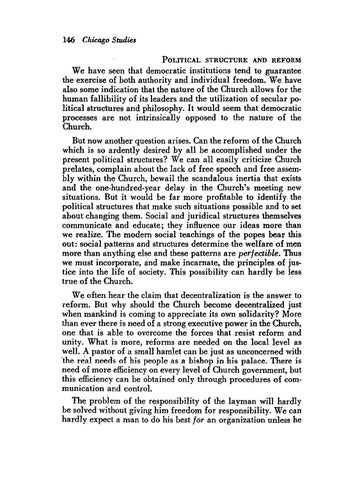 We have seen !hat democratic institutions tend to guarantee the exercise of both authority and individual freedom. We have also some indication that the nature of !he Church allows for !he human fallibility of its leaders and the utilization of secular po· litical structures and philosophy. It would seem that democratic processes are not intrinsically opposed to the nature of the Church. But now another question arises. Can the reform of the Church which is so ardently desired by all be accomplished under !he present political structures? We can all easily criticize Church prelates, complain about the lack of free speech and free assembly within !he ·Church, bewail the scandalous inertia !hat exists and !he one-hundred-year delay in !he Church&#39;s meeting new situations. But it would be far more profitable to identify the political structures that make such situations possible and to set about. changing them. Social and juridical structures !hem selves communicate and educate; they influence our ideas more than we realize. The modern soCial teachings of !he popes bear this out: social patterns and structures determine !he welfare of men more than anyihing else and these patterns are perfectible. Thus we must incorporate, and make incarnate, the principles of justice into the life of society. This possibility can hardly be less true of the Church. · We often hear the claim that decentralization is the answer to reform. But why should !he Church become decentralized just when mankind is coming to appreciate its own solidarity? More !han ever !here is need of a strong executive power in the Church, one !hat is able to overcome !he forces !hat resist reform and unity. What is more, reforms are needed on !he local level as well. A pastor of a small hamlet can be just as unconcerned with ·the real needs of his people as a bishop in his palace. There is need of more efficiency on every level of Church government, but !his efficiency can be obtained only Ihrough procedures of com· munication and control. The problem of the responsibility of !he layman will hardly be solved without giving him freedom for responsibility. We can hardly expect a man to do his best for an organization unless he