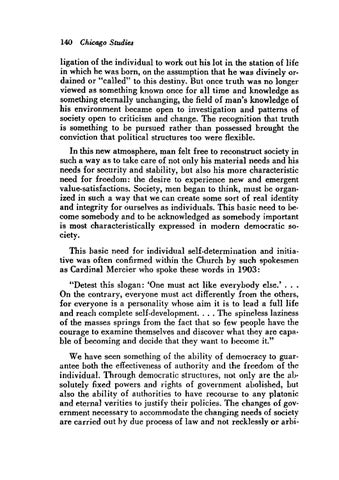 ligation of the individual to work out his lot in the station of life in which he was born, on the assumption that he was divinely ordained or &quot;called&quot; to this destiny. But once truth was no longer viewed as something known once for all time and knowledge as something eternally unchanging, the field of man&#39;s knowledge of his environment became open to investigation and patterns of society open to criticism and change. The recognition that truth is something to be pursued rather than possessed brought the conviction that political structures too were flexible. In this new atmosphere, man felt free to reconstruct society in such a way as to take care of not only his material needs and his needs for security and stability, but also his more characteristic need for freedom: the desire to experience new and emergent value-satisfactions. Society, men began to think, must be organized in such a way that we can create some sort of real identity and integrity for ourselves as individuals. This basic need to become somebody and to be acknowledged as somebody important is most characteristically expressed in modern democratic society. This basic need for individual self-determination and initiative was often confirmed within the Church by such spokesmen as Cardinal Mercier who spoke these words in 1903: &quot;Detest this slogan: &#39;One must act like everybody else.&#39; ..â&amp;#x20AC;˘ On the contrary, everyone must act differently from the others, for everyone is a personality whose aim it is to lead a full life and reach complete self-development.... The spineless laziness of the masses springs from the fact that so few people have the courage to examine themselves and discover what they are capaÂˇ hie of becoming and decide that they want to become it.&quot; We have seen something of the ability of democracy to guarantee both the effectiveness of authority and the freedom of the individuaL Through democratic structures, not only are the abÂˇ solutely fixed powers and rights of government abolished, but also the ability of authorities to have recourse to any platonic and eternal verities to justify their policies. The changes of government necessary to accommodate the changing needs of society are carried out by due process of law and not recklessly or arbi-