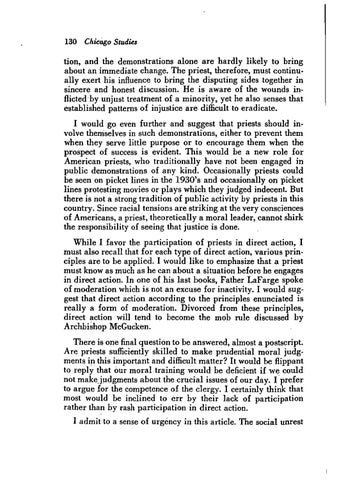 tion, and the demonstrations alone are hardly likely to bring about an immediate change. The priest, therefore, must continually exert his influence to bring the disputing sides together in sincere and honest discussion. He is aware of the wounds inflictedÂˇby unjust treatment of a minority, yet he also senses that established patterns of injustice are difficult to eradicate. I would go even further and suggest that priests should involve themselves in such demonstrations, either to prevent them when they serve little purpose or to encourage them when the prospect of success is evident. This would be a new role for American priests, who traditionally have not been engaged in public demonstrations of any kind. Occasionally priests could be seen on picket lines in the 1930&#39;s and occasionally on picket lines protesting movies or plays which they judged indecent. But there is not a strong tradition of public activity by priests in this country. Since racial tensions are striking at the very consciences of Americans, a priest, theoretically a moral leader, cannot shirk the responsibility of seeing that justice is done. While I favor the participation of priests in direct action, I must also recall that for each type of direct action, various principles are to be applied. I would like to emphasize that a priest must know as much as he can about a situation before he engages in direct action. In one of his last books, Father LaFarge spoke of moderation which is not an excuse for inactivity. I would suggest that direct action according to the principles enunciated is really a form of moderation. Divorced from these principles, direct action will tend to become the mob rule discussed by Archbishop McGucken. There is one final question to be answered, almost a postscript. Are priests sufficiently skilled to make prudential moral judgments i11 this important and difficult matter? It would be flippant to reply that our moral training would be deficient if we could not makej:udgments about the crucial issues of our day. I prefer to argue for the competence of the clergy. I certainly think that most would be inclined to err by their lack of participation rather than by rash participation in direct action. I admit to a sense of urgency in this article. The social unrest