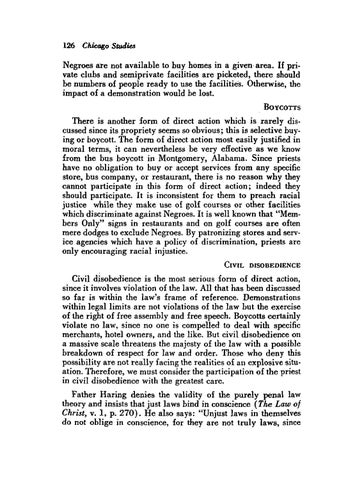 Negroes are not available to buy homes in a givenÂˇ area. If private clubs and semiprivate facilities are picketed, there should be numbers of people ready to use the facilitieÂˇs. Otherwise, the impact of a demonstration would he lost. BovcoTTS There is another form of direct action which is rarely discussed since its propriety seems so obvious; this is selective buying or boycott. The form of direct action most easily justified in moral terms, it can nevertheless be very effective as we know from the bus boycott in Montgomery, Alabama. Since priests have no obligation to buy or accept services from any specific store, bus company, or restaurant, there is no reason why they cannot participate in this form of direct action; indeed they should participate. It is inconsistent for them to preach racial justice while they make use of golf courses or other facilities which discriminate against Negroes. It is well known that &quot;Members Only&quot; signs in restaurants and on golf courses are often mere dodges to exclude Negroes. By patronizing stores and service agencies which have a policy of discrimination, priests are only encouraging racial injustice. CiVIL DISOBEDIENCE

Civil disobedience is the most serious form of direct action, since it involves violation of the law. All that has been discussed so far is within the law&#39;s frame of reference. Demonstrations within legal limits are not violations of the law but the exercise of the right of free assembly and free speech. Boycotts certainly violate no law, since no one is compelled to deal with specific merchants, hotel owners, and the like. But civil disobedience on a massive scale threatens the majesty of the law with a possible breakdown of respect for law and order. Those who deny this possibility are not really facing the realities of an explosive situation. Therefore, we must consider the participation of the priest in civil disobedience with the greatest care. Father Haring denies the validity of the purely penal law theory and insists that just laws bind in conscience (The Law of Christ, v. l, p. 270). He also says: &quot;Unjust laws in themselves do not oblige in conscience, for they are not truly laws, since