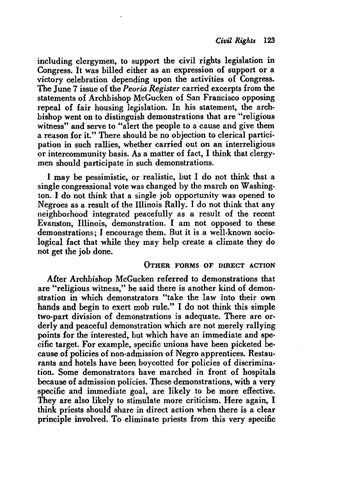 including clergymen, to support the civil rights legislation in Congress. It was billed either as an expression of support or a victory celebration depending upon the activities of Congress. The June 7 issue of the Peoria Register carried excerpts from the statements of Archbishop McGucken of San Francisco opposing repeal of fair housing legislation. In his statement, the arch· bishop went on to distinguish demonstrations that are &quot;religious witness&quot; and serve to &quot;alert the people to a cause and give them a reason for it&quot; There should be no objection to clerical partici· pation in such rallies, whether carried out on an interreligious or intercommunity basis. As a matter of fact, I think that clergy· men should participate in such demonstrations. I may be pessimistic, or realistic, but I do not think that a single congressional vote was changed by the march on Washing· ton. I do not think that a single job opportunity was opened to Negroes as a result of the Illinois Rally. I do not think that any neighborhood integrated peacefully as a result of the recent Evanston, Illinois, demonstration. I am not opposed to these demonstrations; I encourage them. But it is a well-known socio· logical fact that while they may help create a climate they do not get the job done. OTHER FORMS OF DIRECT ACTION

After Archbishop McGucken referred to demonstrations that are &quot;religious witness,&quot; he said there is another kind of demon· stration in which demonstrators &quot;take the law into their own hands and begin to exert mob rule.&quot; I do not think this simple two-part division of demonstrations is adequate. There are or· derly and peaceful demonstration which are not merely rallying points for the interested, but which have an immediate and spe· cific target. For example, specific unions have been picketed be· cause of policies of non-admission of Negro apprentices. Restaurants and hotels have been boycotted for policies of discrimination. Some demonstrators have marched in front of hospitals because of admission policies. These demonstrations, with a very specific and immediate goal, are likely to he more effective. They are also likely to stimulate more criticism. Here again, I think priests should share in direct action when there is a clear principle involved. To eliminate priests from this very specific