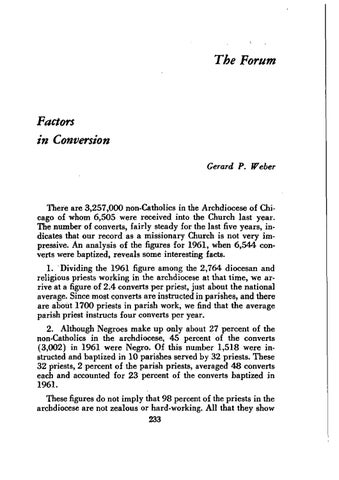 There are 3,257,000 non-Catholics in the Archdiocese of Chicago of whom 6,505 were received into the Church last year. The numher of converts, fairly steady for the last five years, indicates that our record as a missionary Church is not very impressive. An analysis of the figures for 1961, when 6,544 converts were baptized, reveals some interesting facta. I. ÂˇDividing the 1961 figure among the 2, 764 diocesan and religious priests working in the archdiocese at that time, we arrive at a figure of 2.4 converts per priest, just about the national average. Since most converts are instructed in parishes, and there are about 1700 priests in parish work, we find that the average parish priest instructs four converts per year.