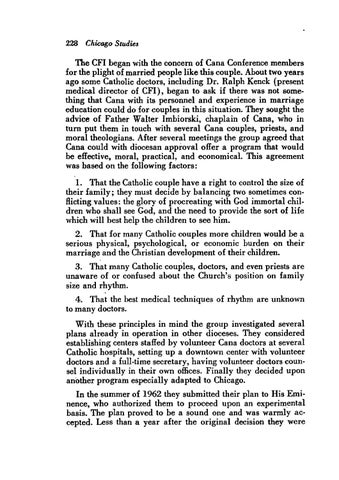 The CFI began with the concern of Cana Conference members for the plight of married people like this couple. About two years ago some Catholic doctors, including Dr. Ralph Kenck (present medical director of CFI), began to ask if there was not some· thing that Cana with its personnel and experience in marriage education could do for couples in this situation. They sought the advice of Father Walter lmbiorski, chaplain of Cana, who in tum put them in touch with several Cana couples, priests, and moral theologians. After several meetings the group agreed that Cana could with diocesan approval offer a program that would be effective, moral, practical, and economical. This agreement was based on the following factors:

1. That the Catholic couple have a right to control the size of their family; they must decide by balancing two sometimes con· flicting values: the glory of procreating with God immortal children who shall see God, and the need to provide the sort of life which will best help the children to see him. 2. That for many Catholic couples more children would be a serious physical, psychological, or economic burden on their marriage and the Christian development of their children. 3. That many Catholic couples, doctors, and even priests are unaware of or confused about the Church&#39;s position on family size and rhythm .

4. That the best medical techniques of rhythm are unknown to many doctors. With these principles in mind the group investigated several plans already in operation in other dioceses. They considered establishing centers staffed by volunteer Cana doctors at several Catholic hospitals, setting up a downtown center with volunteer doctors and a full-time secretary, having volunteer doctors conn· sel individually in their own offices. Finally they decided upon another program especially adapted to Chicago. In the summer of 1962 they submitted their plan to His Emi· nence, who authorized them to proceed upon an experimental basis. The plan proved to be a sound one and was warmly ac· cepted. Less than a year after the original decision they were