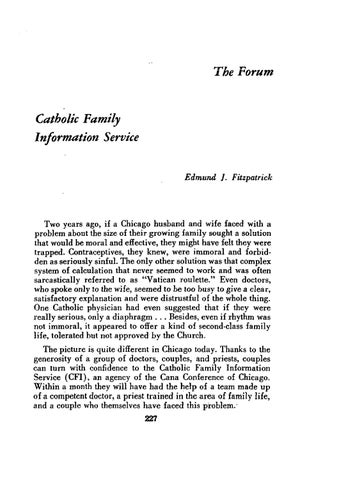 Two years ago, if a Chicago husband and wife faced with a problem about the size of their growing family sought a solution that would be moral and effective, they might have felt they were trapped. Contraceptives, they knew, were immoral and forbidden as seriously sinful. The only other solution was that complex system of calculation that never seemed to work and was often sarcastically referred to as &quot;Vatican roulette.&quot; Even doctors, who spoke only to the wife, seemed to be too busy to give a clear, satisfactory explanation and were distrustful of the whole thing. One Catholic physician had even suggested that if they were really serious, only a diaphragm ... Besides, even if rhythm was not immoral, it appeared to offer a kind of second-class family life, tolerated but not approved by the Church. The picture is quite different in Chicago today. Thanks to the generosity of a group of doctors, couples, and priests, couples can tum with confidence to the Catholic Family Information Service ( CFI), an agency of the Cana Conference of Chicago. Within a month they will have had the help of a team made up of a competent doctor, a priest trained in the area of family life, and a couple who themselves have faced this problem.Âˇ 227